ST. JOSEPH, Mo., April 6, 2021 /PRNewswire/ -- Boehringer Ingelheim has transitioned to renewable energy to power its largest U.S. manufacturing site, in St. Joseph, Mo., as part of a broader company commitment to environmental sustainability in the United States and around the world. 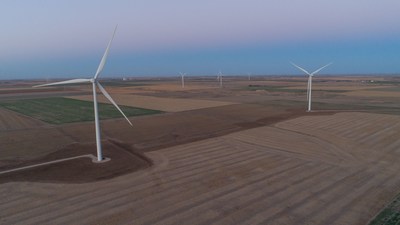 The company recently signed a 10-year contract with Evergy Inc., which serves about 1.6 million customers in Kansas and Missouri, to buy energy generated at a wind farm in Kansas for its site in St. Joseph. The change will reduce carbon emissions at the site by 76 percent as part of a broader company commitment to environmental sustainability nationwide.

A company site in Barceloneta, Puerto Rico, plans to reduce its carbon footprint by about 30 percent a year by using natural gas to generate electricity. That process will create steam and hot water that the site will use in its everyday operations.

In St. Joseph, Gainesville and Ridgefield, the company has taken a variety of other steps to reduce greenhouse gas emissions, installing LED lights and solar panels and implementing numerous projects to increase energy efficiency at several U.S. sites.

"From reducing our carbon footprint to reducing the amount of electricity and water we use, we are dedicated to providing a more sustainable future for the people and animals we serve and the communities where we live and work," said Jean-Michel Boers, President and CEO of Boehringer Ingelheim USA Corp.

Renewable-energy use has tripled in the United States in the last 20 years to account for 11 percent of U.S. energy consumption, the U.S. Energy Information Administration says. Renewable energy plays an important role in reducing the greenhouse-gas emissions that contribute to climate change.

"Boehringer Ingelheim is committed to making a positive impact on the environment now and into the future," said Randolph Legg, President and Head of the Commercial Business at Boehringer Ingelheim Animal Health USA Inc. "As a company that thinks in generations, we know that an investment in environmental sustainability will pay dividends for years to come."

The lives of animals and humans are interconnected in deep and complex ways. We know that when animals are healthy, humans are healthier too. Across the globe, our?9,700?employees are dedicated to delivering value through innovation, thus enhancing the well-being of both.?

Respect for animals, humans and the environment guides us every day. We develop solutions and provide services to protect animals from disease and pain. We support our customers in taking care of the health of their animals and protect our communities against life- and society-threatening diseases.?

Boehringer Ingelheim Animal Health is the second largest animal health business in the world, with net sales of $4.7 billion (4.1 billion euros) in 2020 and presence in more than 150 countries.?

Boehringer Ingelheim Animal Health has a significant presence in the United States,?with more than 3,100 employees in places that include Georgia, Missouri, Iowa, Minnesota, New Jersey and Puerto Rico. To learn more, visit www.boehringer-ingelheim.us, www.facebook.com/BoehringerAHUS or www.twitter.com/Boehringer_AH.

Making new and better medicines for humans and animals is at the heart of what we do. Our mission is to create breakthrough therapies that change lives. Since its founding in 1885, Boehringer Ingelheim has been independent and family owned. We have the freedom to pursue our long-term vision, looking ahead to identify the health challenges of the future and targeting those areas of need where we can do the most good.

As a world-leading, research-driven pharmaceutical company, with around 52,000 employees, we create value through innovation daily for our three business areas: Human Pharma, Animal Health, and Biopharmaceutical Contract Manufacturing.

In 2020, Boehringer Ingelheim achieved net sales of around $22.33 billion (19.57 billion euros). Our significant investment of over $4.2 billion (3.7 billion euros) in 2020 (18.9% of net sales) in R&D drives innovation, enabling the next generation of medicines that save lives and improve quality of life.

We realize more scientific opportunities by embracing the power of partnership and diversity of experts across the life-science community. By working together, we accelerate the delivery of the next medical breakthrough that will transform the lives of patients now, and in generations to come.